Before introducing the boring content（Because this is a very long article）, let’s show you the types of magnetic coupling.

What is Magnetic Coupling

What is magnetic coupling? 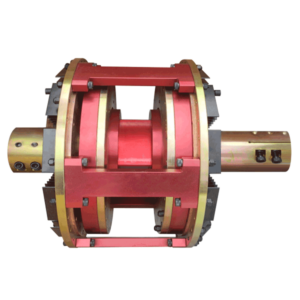 It can convert the dynamic seal of the shaft to transmit the power into the static seal, so as to realize the zero leakage transmission of the power. Magnetic coupling transmission transmits force or torque, which is realized by using the characteristics of the magnetic field force. Magnetic coupling transmission does not require relative contact or connection of two permanent magnets. Therefore, when the driving member rotates, the driven member can be rotated at the same time under the action of the magnetic field force, and there is no need for active movement between the inside and outside of the working container. The shaft (or transmission rod) passes through the container wall to achieve the purpose of work, so that the static sealing state of the power transmission process can be achieved, and zero leakage can be completely achieved.

It can realize overload protection during the operation of working machinery. Under the condition that there is no rigid connection between the driving part and the driven part. The working torque can be appropriately increased in the design to increase the sense of safe movement. When the load of the driven part increases suddenly and the overload is too large, the two parts may slip out. The transmission of torque avoids the danger of the follower being easily damaged when it does not work normally (such as the driving shaft lock, sweeping, etc.), and also protects the motor.

Compared with rigid couplings, it is more convenient to install, disassemble, debug and maintain. The magnetic coupling transmission device is relatively simple in structure, and there is a gap between the driving part and the driven part, which is easy to install, disassemble and maintain, which can not only reduce the difficulty and labor intensity of equipment maintenance but also improve the working efficiency of the equipment.

It can purify the environment, eliminate pollution and realize civilized production. Environmental protection is a basic national policy to achieve sustainable economic development. It is developed by applying magnetic coupling transmission technology in production. Like the process of petroleum, chemical, pharmaceutical, offshore oil well operations, non-ferrous metal smelting, wet mineral processing, food and other industries. The magnetic coupling pump can completely avoid the leakage of corrosive media such as toxic, harmful, flammable, explosive, strong acid, strong alkali, etc.. Which not only protects the safety of operators but also prevents environmental pollution.

Hysteresis in the starting process

In addition to the conventional magnetic coupling transmission, the magnetic coupling transmission has the dynamic seal that can convert the shaft to transmit power to a static seal, which realizes smooth operation, avoids vibration transmission, realizes overload protection of the working device during operation, and is connected with the rigid coupling. In addition to a series of characteristics such as easy installation and debugging, disassembly and maintenance, purification of the environment, elimination of pollution, and realization of civilized production, it also has the characteristics of more power transmission methods and complete structure and functions.
① The magnetic coupling transmission technology is changed from a simple two-dimensional plane circular motion to a four-dimensional space helical compound motion, which well solves the control technology of the maximum rotation angle and rotation range, and localizes the complex helical compound motion in an effective space.
② The magnetic circuit design and the mechanical structure design are organically combined into a moving whole to complete the complex motion trajectory; it breaks through the traditional mechanical linkage mechanism of the transmission system, and realizes the dynamic static seal well.
The helical motion operates in three-dimensional space. It can be said that it superimposes the axial propulsion displacement and the time factor on the basis of the plane circular motion, and at the same time solves the quantitative relationship between the rotation angle and the propulsion displacement (both are functions of time); The vector relationship between rotational torque and axial propulsion is solved.
③ The compact arrangement, symmetrical arrangement and asymmetric arrangement of the magnetic poles should be reasonably arranged so that the coupled two groups of separated components can perform relative motion in two-way relative shapes that are correlated, synchronous and asynchronous.
④ Exploring universally applicable laws for the operation of arbitrary conditions and arbitrary states.

Magnetic coupling is classified as follows according to their different classification methods.

it can be divided into three types: synchronous type, eddy current type, and hysteresis type.

If the rotational speed of the driving element is n1, the rotational speed of the driven element is n2, and the transmitted torque is T, the maximum torque that can be transmitted is Tmax, and the intrinsic coercive force of the permanent magnet is JHc1. Permanent magnets are used in both parts, and when the coercive forces in the two parts are equal and large enough, under the condition of n1=n2 and T < Tmax, the magnetic coupling drive is called synchronous magnetic coupling. 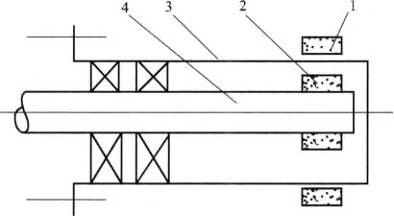 it can be divided into linear motion, rotary motion, compound motion and some other special motions.

Its structure is shown in Figure 1.1. When the driving part moves in a straight line, the driven part also moves in a straight line. The active part is annularly arranged on the outside of the isolation sleeve, and is usually composed of parts such as an outer magnet, a magnetic shield, an outer cover, and a transmission part. The follower is also annular, which is composed of inner magnets, isolation sleeves, magnetic circuits, fasteners, transmission parts and other parts.

Its structure is shown in Figures 1-2. When the outer magnetic rotor 3 rotates by the motor, the inner magnetic rotor 7 also rotates accordingly. The driving part and the driven part of this magnetic coupling transmission are composed of a rotating shaft, a permanent magnet, an isolation sleeve, a magnetic circuit, and a bearing. , bearing housing and other components. 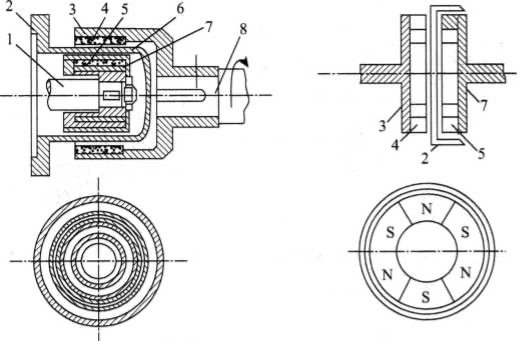 It can also be realized by a combination of the electromagnetic field and permanent magnetic field. This structure can transform the transmission of reciprocating motion into intermittent rotational motion.
As shown in Figure 1.4. In figure (a), the solenoid coil drive is placed on component 1 in the sealed container, and the ratchet mechanism can be used to ensure the intermittent rotation of the ratchet wheel 2. In figure (b), when electromagnet 5 attracts the armature 6, the ratchet wheel 4 is rotated by an angle through the lever 3 and the pawl, and the reciprocating motion of the armature 6 can be converted into a rotary motion.
The structures shown in Figures 1-5 can be used when periodic oscillations need to be delivered into the sealed container. This magnetic coupling swing structure places the electromagnetic coil in the atmosphere, and swing member 2 is realized through an isolation sleeve.

According to the structure of magnetic coupling,

it can be divided into two types: Drum type magnetic coupling and Disc type. 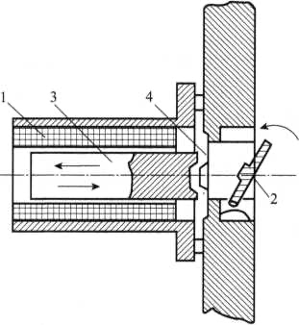 The layout of permanent magnets

it can be divided into two types: gap dispersion type and combined pull-push type.