A fluid coupling is a special mechanism that transmits torque from the shaft of the power unit to the gearbox. It is the most important part of the hydromechanical transmission, but recently the torque converter has been used more and more as a replacement, although this part has recently been installed on all cars with automatic and semi-automatic transmissions.

The range of fluid couplings is not limited to automobiles and other vehicles. These mechanisms are essential in the construction of various conveyors, they are included in the design of elevators, fume extractors, various types of pumps and gas turbines as well as in the design of mills, crushers and similar agricultural and industrial installations . In addition, parts that were the subject of our conversation included rotary excavators, road rollers, centrifuges, concrete mixers and tumble dryers. Thus, for example, the fan coupling is an integral element in the drive of the cooling system of some makes and models of automobiles. If we simply talk about the function of this part, it boils down to automatically turning on/off the fan according to changes in motor temperature. 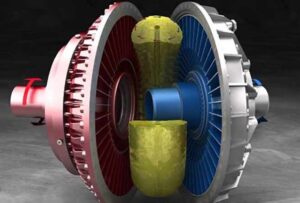 This part is considered the easiest solution to simplify the drive design in the cooling system. It is made in the form of small pieces connecting the impeller and pulley. The device requires no electrical drive, no connection to other components, and its operation is completely autonomous.

To control the operation of the fans, some cars are equipped with hydrodynamically coupled sensors—a device that turns on and then automatically turns off the fan when necessary based on coolant temperature. The drive’s fluid coupling offers many advantages over other types of drives, and its installation is more suitable for off-road vehicles that are subject to high loads in harsh operating conditions.

So its use, for example, minimizes the need to use shutters before cooling the radiator, saving time before overcoming water obstacles on the car (the driver doesn’t have to turn off the fan before wading through the water). Among other things, the mechanism has been shown to reduce fuel consumption and make the engine quieter, especially at idle. It is no exaggeration to say that the engine fluid coupling can be called the simplest element in the hydrodynamic transmission. It has the same torque on the drive and driven shafts, it doesn’t change them, but transfers the required rotational speed from the motor shaft to the gearbox.

It is this part that is responsible for smooth gear shifting, it slows down rotational oscillation, provides a smooth start of movement and good acceleration without jerks.

This is possible because there is no rigid coupling between the clutch components and between the drive and driven shafts, the rotational motion is transmitted smoothly to the shaft without jerks or jerks.

The mechanism that has been the subject of our conversation works based on the simplest principles. Since the working fluid is viscous, the torque comes from the rotor. The function of this fluid is performed by the fluid coupling oil. The control of the parts is carried out through two parts – a helical bimetal spring and a plate. Depending on the change in temperature, the spring twists or loosens, turning the bimetallic piece attached to the pin.
The plate is also affected by temperature changes and can bend or straighten, allowing channels to open or close, respectively. If the vehicle’s engine is cold (which usually happens immediately after starting), the fluid coupling is also cold, its springs are short, the plates are respectively close to the partitions, and the passages are closed. When the engine heats up, the clutch also heats up, and its spring loosens under the influence of the heat, causing the plate to spin – it moves, opening the channel, which helps the working fluid get into the chamber. Due to the viscosity of this liquid, the fan starts to spin.

The plate, also subject to temperature changes, either flexes or straightens, allowing the channels to open or close, respectively. If the vehicle’s engine is cold (and this usually happens immediately after starting it), the fluid coupling is also cold, its spring is short, and the plate is close to the separating plate, respectively, the channels are closed.  When the engine heats up, the clutch also heats up, its spring unwinds under the influence of heat, causing the plate to rotate – it shifts, opens the channel, which contributes to the entry of the working fluid into the chamber. Due to the viscosity of this liquid, the rotation of the fan begins. Device The main components of the fluid coupling are impellers in the amount of 2 pieces. The first blade is connected to the drive shaft of the vehicle, the second – to the driven shaft. There is oil inside the hydraulic clutch.  Describing the fluid coupling device in more detail, it is necessary to mention the following structural elements: pump blade, which is directly connected to the crankshaft; turbine wheel; seal; fill plug; cooling fins; shafts (crankshaft and driven). Symptoms of a Fluid Coupling Failure The most common signs of fluid coupling wear are: Minor slippage of the clutch at the time of the start of the movement of the car. The car does not respond to the accelerator pedal for a couple of seconds and accelerates very weakly, but then starts moving normally. When driving in city mode, vibrations are felt. As a rule, this happens at a speed of about 60 km / h. During the movement of the car under load (sharp rise, transportation of cargo, etc.), vibration is felt. Vehicles equipped with an automatic transmission move in jerks, which is especially noticeable when engine braking is performed.

In some cases, part failure can be determined by ear. So, during gear shifting, noise appears, which disappears simultaneously with an increase in engine speed. Sometimes when driving at a speed of about 60 km / h, a howl appears, which is accompanied by vibration.

If at least one of the above signs is found, it is necessary to visit the service station and perform diagnostics, and, if necessary, repair the fluid coupling in order to eliminate the risk of more serious problems in the future.

Advantages and disadvantages of fluid coupling

A fluid coupling can be used to transmit power with little or no shock loading.
There is no contact between the driving shaft and the driven shaft, so it does not cause any wear and tear.
The fluid coupling has a controlled start-up speed, which means it can be started without causing damage to the machines involved.
In case there is an excess load on the system, the fusible plug melts and oil drains out of the coupling, causing it to disengage from the engine.
The torque transmitted by the coupling can be adjusted by filling more or less oil into it.

Fluid couplings have a number of disadvantages, including:
• There is a slip between the pump and turbine wheels when the fluid coupling is operating.•
The fluid in the casing must be compatible with the coupling components; otherwise, damage to both the casing and other parts of the coupling can occur.•
Fluid couplings do not transmit torque when both shafts are rotating at the same angular velocity; when this happens, heat is generated in the coupling as it dissipates energy as a byproduct of friction.
Requires regular oil additions and oil changes
It takes a very long time to replace the oil seal each time, which is a huge loss for some enterprises. Long periods of downtime mean less production.(This is why some companies have begun to use magnetic couplings instead of hydraulic couplers.)

Due to the presence of fluid coupling in the vehicle drive system, the static and dynamic characteristics of the engine are noticeably improved, which, in general, has an optimal effect on the performance of the car and its reliability. The part we talked about today prevents motor overload and prolongs the life of the machine.

Are there other couplings that can replace the fluid coupling?